In Exploding Kittens, you’re trying to be the last person standing by avoiding being blown up by an exploding kitten. Use your wits and luck to survive by playing cards to not draw cards, skip your turn or by having a very handy diffusing kitten at the ready, while also stacking the deck against the other players.

A card game for people who are into kittens and explosions and laser beams and sometimes goats. 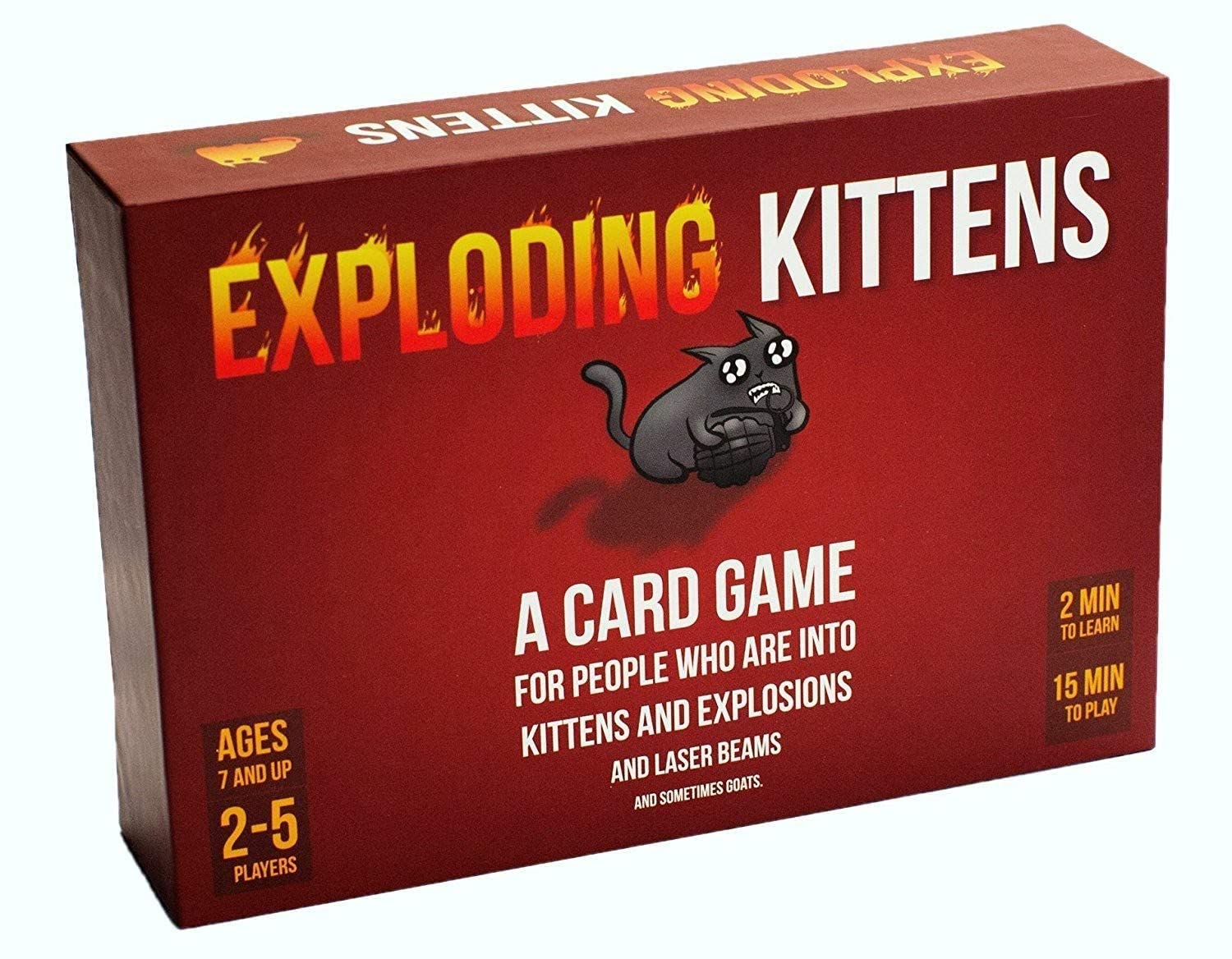 What is it about?

Exploding Kittens fits into that category of “quick, fast, easy-to-play game that you can toss in your gaming backpack and have on-hand to play just whenever.” Up to five people can play and games are generally around 10-15 minutes. It’s a fun, little game that you can have a short game of between other games, or even make a full evening of playing. Rounds are pretty quick, so even if you get blown up early (which shouldn’t happen too often, since you get a Defuse card in your hand at the start), you won’t be sitting around, waiting very long until the next round starts. The artwork, done by The Oatmeal’s artist, is cute and fits perfectly with the tongue-in-cheek theme of the game. There’s the Standard deck and the NSFW deck, both of which can be shuffled together if you want to accommodate up to nine players at a time. If you’re a fan of quick, press-your-luck and “gotcha” styles of games, or even if you just like The Oatmeal, I suggest giving it a try.

There are 9 types of cards in the game:
1. Defuse – Use this to avoid being blown up if you draw an Exploding Kitten card. If you don’t have one when you do draw an Exploding Kitten card, you’re out of the game.
2. Exploding Kitten – You can’t really call a game Exploding Kittens without Exploding Kitten cards in it. If you draw one of these, you’re out of the game (unless you have a Defuse in your hand).
3. See the Future – This card allows you to look at the top 3 cards of the deck. You can’t change how they’re arranged, but you get an idea of what’s coming up.
4. Favor – Use this to force another player to give you one of their cards (their choice on what they give you, though).
5. Nope – This card cancels out any other action of another player.
6. Skip – Play this card to skip your turn, meaning you don’t have to draw at the end of it (so no chance of getting an Exploding Kitten).
7. Shuffle – Just as the name says, this lets you shuffle the deck of cards.
8. Attack – Like a Skip, but meaner. Not only do you end your turn without having to draw, but the next person after you has to take two turns in a row.
9. Cards With No Instructions – These are set-matching cards of the deck. If you have a matching pair, you can play them together to steal a card, at random, from another player. If you play three of a kind, then you can name a type of card and take that from another player provided they have one. If they don’t, you’re out of luck. 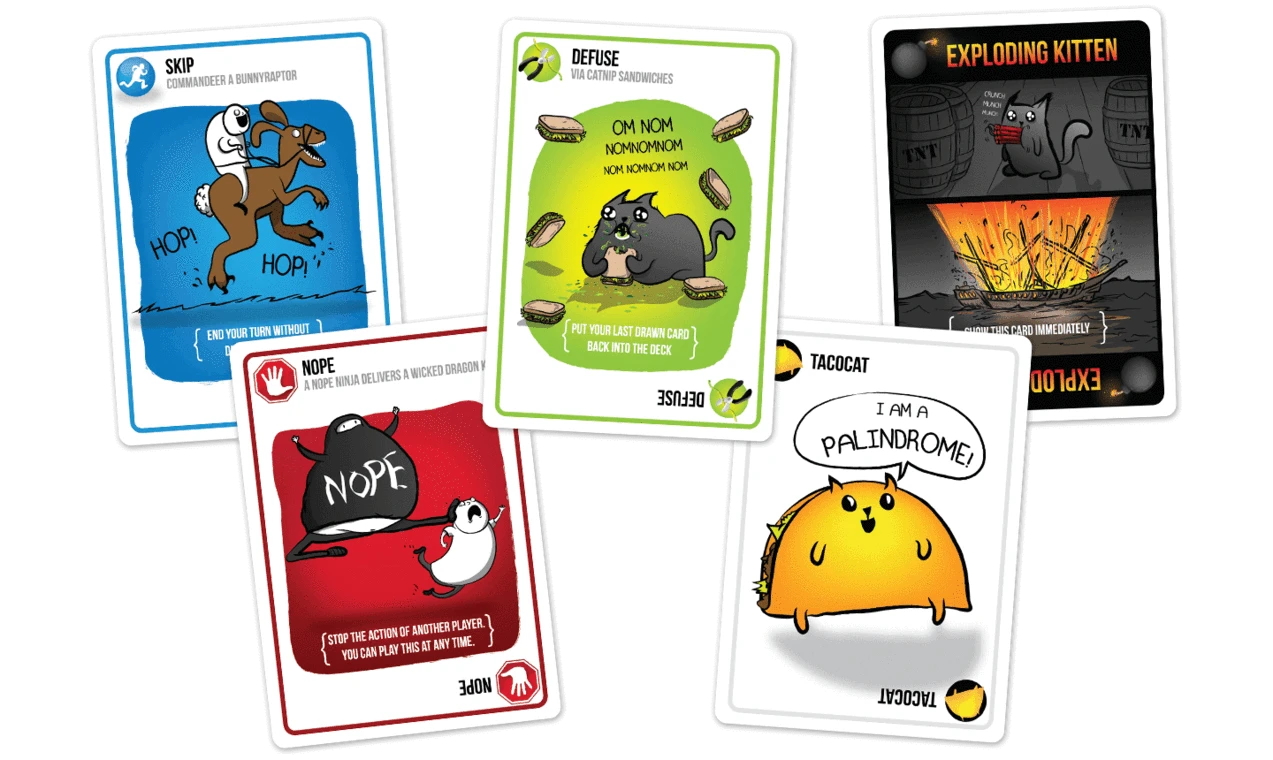 Game play is rather simple. On your turn you play cards from your hand, as many as you want, including none if you so choose, or if can’t play anything. When you’re done, you draw a card (assuming you’ve not played an Attack or Skip card). Drawing your card is the end of your turn, so make sure you’ve done all you want before you draw. If you draw anything but an Exploding Kitten, then keep your card to yourself and breathe a sigh of relief… for now. If you draw an Exploding Kitten, you explode! If you’ve got a Defuse, you’re ok. However, you have to put that Exploding Kitten card back into the draw pile. So turn your back or put the cards under the table, or some other way to hide it from others’ views and put the card back in. You can pick where you want to put it, so if there’s someone at the table you want to get back at for something, now’s your time to set up your revenge plot. Put the cards back out after you’re done, cackle maniacally, and let the next player take their turn, if they dare. If you didn’t have a Defuse, you exploded and are out. Sit quietly and wait for the next game to start. Or I guess you could storm off in a huff, but what fun would that be? 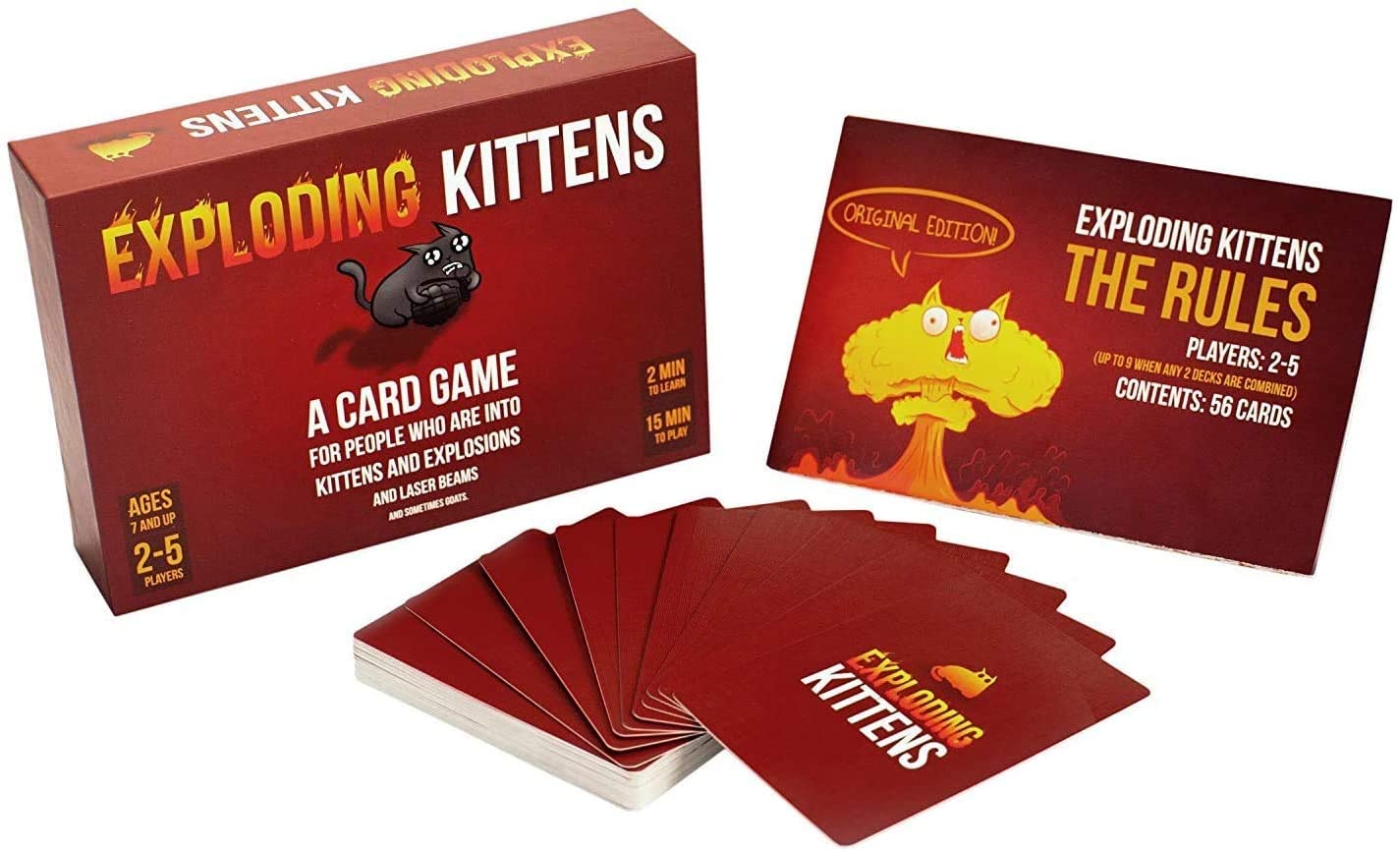 The game comes with 56 cards and instructions leaflet. But there are a number of expansions which add more cards.

The game is quick and a lot of fun. If you enjoy “take that” games or enjoy the Oatmeal’s art then it’s a definite yes. It makes for a great filler game or something to play while you wait for people to show up for game night. It also makes a great gift as most people seem to enjoy the game in my experience.