Gather a party of heroes and get ready to slay some monsters –  but always keep an eye on the other players as they will try to foil your plans and achieve victory themselves. Here to Slay is a 2 – 6 player fantasy card game, from the creators of Unstable Unicorns.

A strategic fantasy card game from the creators of Unstable Unicorns. 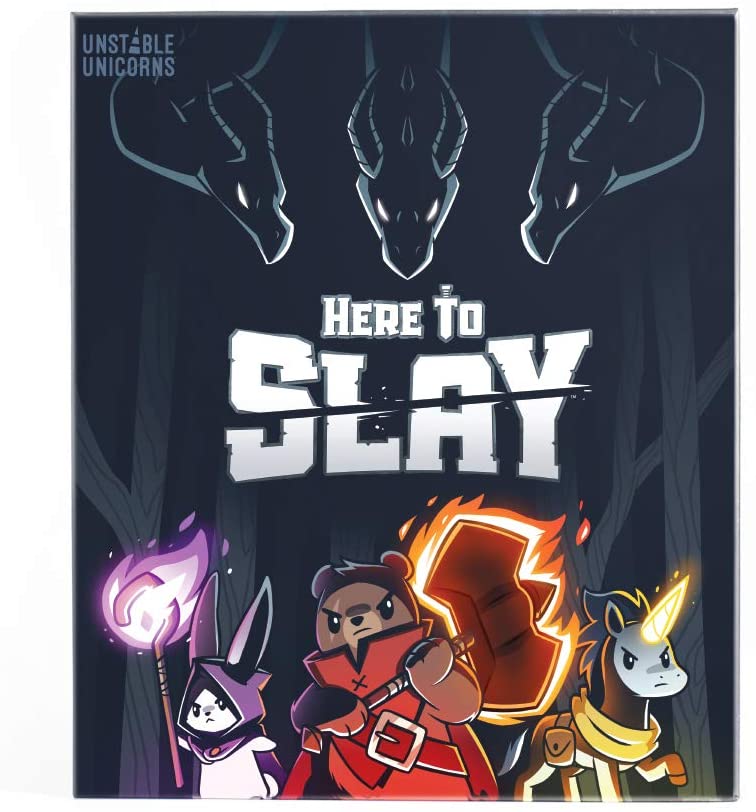 What is it about?

In Here to Slay, you’ll start as an unique Party Leader and work towards gathering a combination of heroes to your parry and attempt to slay Monsters. To win you’ll need to be the first player to slay three monsters or gather a party with six unique hero classes. Setup is quick – every player chooses a party leader and then gets dealt 5 cards. Use the rest of the cards as the draw deck. Shuffle the monsters deck and reveal three face up. These will be the first monsters that the players can take on.

On your turn you can take 3 actions. Which gives you the opportunity to play a hero card from your hand and activate it’s ability. To activate abilities you are required to roll two D6 dice and beat the success value stated on the card.

Play and Item card, play a magic card or activate an already played(the hero is already on the table) hero’s ability. All the aforementioned actions take only one of your actions to do, but to attack a monster takes two of your actions in a turn.

When attacking a monster you need to make sure that you meet the Hero requirement for that monster – some will require more heroes in your party or a certain combination of hero classes. Then once again you’ll roll two D6 dice to try and beat the success rating on the  monster card. There is also a penalty value on the monster cards, which could see you having to sacrifice a hero or some cards if you fail to slay the monster by a big margin on the roll.

That is the basics for your own turn, but there are also challenge and modifier cards that any player can play to try and disrupt another players action. More on those later. Lets take a quick look all the card types.

Like the heroes each party leader has a class and special ability to help you during the game. You only get to choose one at the start of the game so choose wisely 😉 Also remember that you your leader’s class also counts towards the six unique ones you need to win.

Once again each hero has a class and ability, which requires a roll to activate. There are some great combos available and you’ll see that the classes tend to stick to a certain style. 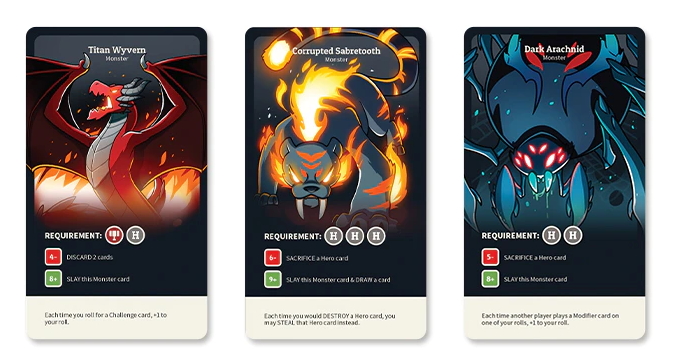 Monster cards have a specific hero requirement to satisfy before you can take them on. If beaten they offer a bonus for the rest of the game, and gets you closer to winning by needing to slay three monsters. But be careful as you’ll need to beat then with a two D6 roll. And if you lose by a certain value then you might have to sacrifice one you heroes or discard some cards. This is also the most likely place where other players will play modifier cards to affect the outcome of the battle.

Items come in the form of upgrades for your heroes. Giving them better odds on their rolls or totally new abilities. There’s also a few cursed items that’ll fit well on your opponents heroes.

Magic cards are generally one time effects that you get to do. Like drawing cards, getting a bonus on your rolls or taking something from the discard pile.

Challenge cards allows you stop another player from playing a hero, item, or magic card. As the name suggests you and the other player will now have to roll off to see who wins. Each players rolls two D6 and then modifier cards can be applied. The winner gets to play their card or if you challenged then that player needs to discard their card.

Modifier cards add or subtract from the total of any roll and as such are quite powerful. The player playing the card can choose which side to affect with the value stated. So keep those to foil your opponents’ plans or seal victory for yourself. 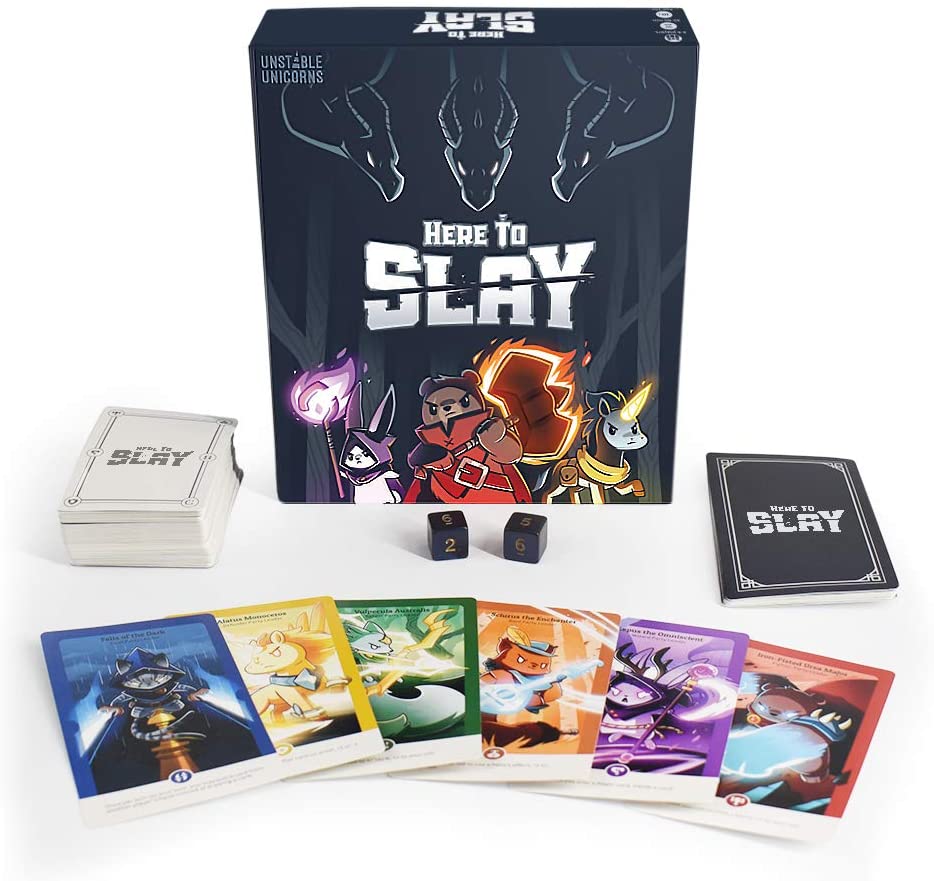 Over our many, many games we’ve played around with a few tweaks on the rules. Here are a couple suggestions that you can try when playing the game to freshen things up.

All players start with a challenge card. This is especially useful if you’re the party leader that gets a bonus to challenge rolls. As it very often happens that you don’t draw one during the game.

The Attack Monster action only takes one action on your turn, but it’s limited to one time during your turn. Once again this helps encourage players to try and slay monsters as we’ve found that gathering heroes is a much easier win condition to satisfy.

A definite yes! The game is awesome to look at and play. The illustrations are top notch and the names and descriptions quite funny. It’s a great starter for any game night and games tend to go on for about an hour once everyone knows how to play. There’s enough strategy to keep the serious players engaged while it’s very easy to pick up for beginners. Challenge cards and modifiers keeps everybody involved even during other player’s turns. If you’ve played and like Unstable Unicorns then this is just a slight twist on that formula and adds quite a number of options for players. We easily recommend this game and really like the extra layers it adds over Unstable Unicorns.