“In the Emperor’s Name” updated 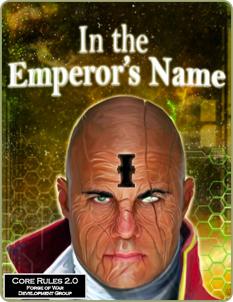 In the Emperor’s Name is a fan-created set of skirmish rules to download for free.

From  Craig Cartmell of Gawd’elp us Games –

“Have you ever wished to play a bold Imperial Inquisitor facing down the enemies of man with a brave retinue of warriors around you? Or perhaps lead a sinister coven of chaos cultists in an effort to undermine the deluded followers of the Corpse-Emperor?

The Forge of War Development Group are proud to announce the release of their newest rules: In The Emperor’s Name. A skirmish game where each player plays a Hero or Villain with his or her Retinue of five to ten figures.

Like many of our games the rules of play are simple and concise, but with enough detail to give a fun evening’s gaming.

Within the game are a full set of rules for scenarios, solo campaigning and lists for using:
The Servants of the Emperor, an Inquisitor and his retinue.
The Enemies of Man, a Chaos Agent and his foul followers.
The Adeptus Astartes, including all the famous Chapters.
The Ecclesiarchy, including the Martial Sisterhoods.
The Imperial Guard, in all its glory. Now you can be Commissar Gaunt or Col. Schaeefer on a do-or-die mission.
Ordo-based Inquisitor Retinues, for those who hanker after being a hunter of Witches, Xenos or Daemons.
The Adeptus Arbites, the watchmen of the Imperium.
An Imperial Navy Landing Party, for those who wish to cry ‘Avast Ye Lubbers!’
A Rogue Trader and his crew of mercenaries and misfits.
The Traitor Legions, including each of its foul legions.
A Blood Pact Death Brigade infiltration team.
A Blood Axe Ork Warband.
The Genestealer cult, complete with Patriarch, Magus and Hybrids.
A Tau Incursion Team.
A Squat Brotherhood, lost but never forgotten.

Retinue lists for other forces are in the process of being prepared, as are various scenarios and campaigns.”