Starting off a post like this is pretty difficult, so im going to jump right into it. I love 40k. Unfortunately as im sure you are all aware there has been a significant drop in interest in favour of; squares, little plastic space ships, and a game played with tiles featuring assorted colours of noodles. Now im not going to say that 40k is better but I think its got the edge on the rainbow noodle game (if you are not in the shop often, im referring to tantrix or tentrix or something like that). What I hope to accomplish with this post and the ones to follow is to rekindle that 40k enthusiasm which was so strong in the club, if I get just 1 person onto a round base the effort would be worthwhile. So I intend on posting regular little rants, interesting info, battle reports, or even advice if I think anyone is listening. I hope to post at least once a week but ideally more often depending on how much I am procrastinating at the time.

As this is the first post forgive me if things seem a little rusty and disorganised im pretty sure it will get better over time, or at least I hope so. Before I start going off on what I actually want to talk about this ‘edition’ (uh… how do I refer to this?), I want to lay down some ground rules:

Well then with all that out of the way I can get back to what I want to discuss in this first ‘issue’ (again, what is this?).

By now most of you know that the official release for the new necron codex is days away and have seen all the snazzy new models. Some of use have been waiting for quite some time for this release like Charl who by now is probably pacing in front of the shop and checking his watch every 7min. I am very excited about the release I actually have a necron army which I have been hiding for quite some time as I wait for the new codex. Im sure most of you dont really care about Charl pacing so instead I think we should discuss what Matt Ward (author of the book) is going to do with it.

Matt Ward wrote the Grey Knights codex and there was quite alot of critisms about it which revolved around outrageous fluff and overpowered rules, Ward is also leaving GW after this project. When considering Ward’s habits of codex writing and that he may decide that he wants to leave the company with a bang I have been able to make a few predictions on the codex.

Well there you have it, my official predictions for the codex. Jokes aside the new fluff in my opinion is looking great its a complete shift from the old stuff, and if anyone is actually interested from the gaming side they seem to have some pretty average if not under powered rules… hmmm interesting. However thats all based on rumours, I will make my decision on cheese factor when I have the codex in my hands.

So there you have it, the first ‘episode’ (?) I know it was a little long, in future I will try keep it shorter. Let me know what you think. 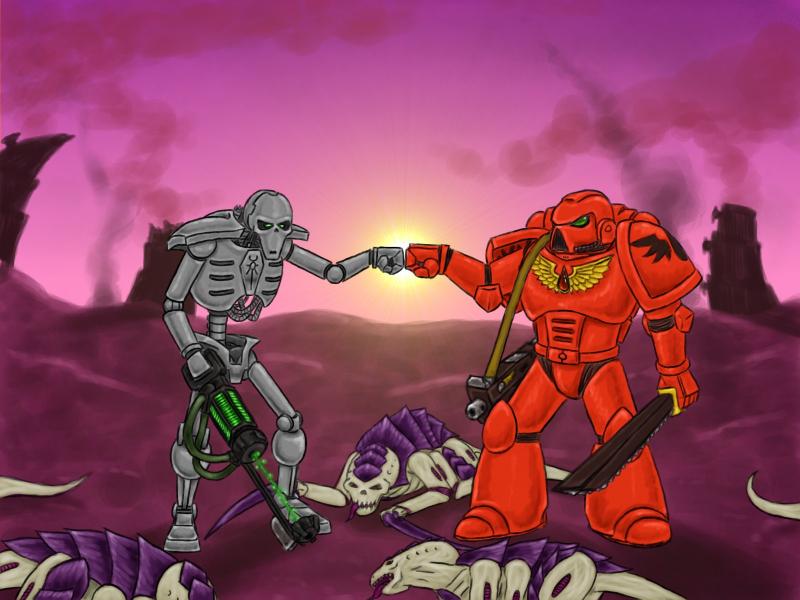