Time to feast our eyes on some beautiful new releases from GW.

Can someone please explain why the new campaign book is limited edition??? WTF! 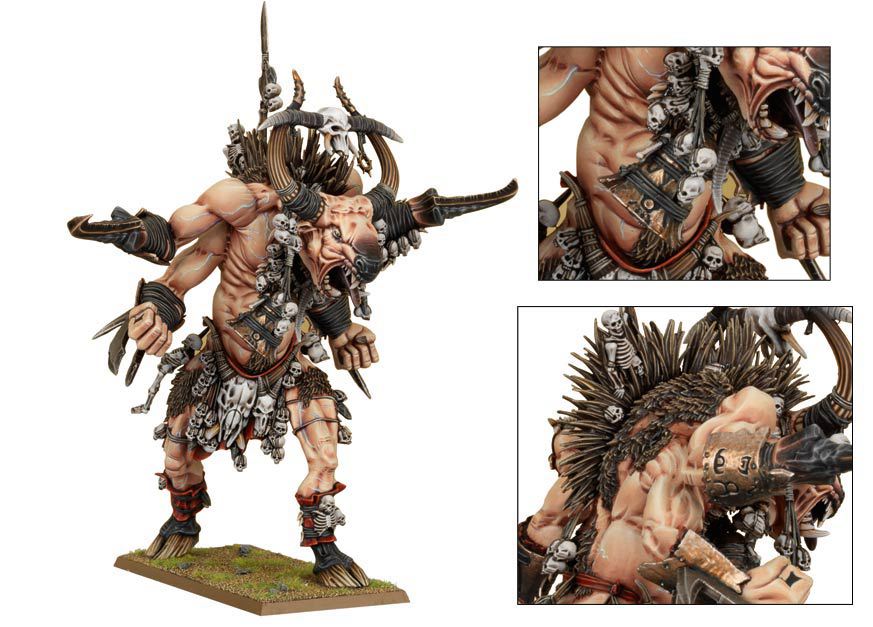 The Ghorgon is a many-limbed, ox-headed slaughterer, possessed of an urgent need to devour and destroy anything it can catch – the meatier the better. It’s believed that they were once Minotaurs, but years of gluttony and the consumption of tainted flesh has led to their rapid growth and extreme mutation. They will typically have four arms, two of which end in bony blades, which they use to carve up their prey; and the other two in grasping hands to help shovel food into their gaping maw. Those brave enough to stand their ground against such a violent beast will find themselves fighting a blood-crazed nightmare, as the Ghorgon smashes, stamps and chews its way through everything in its path. 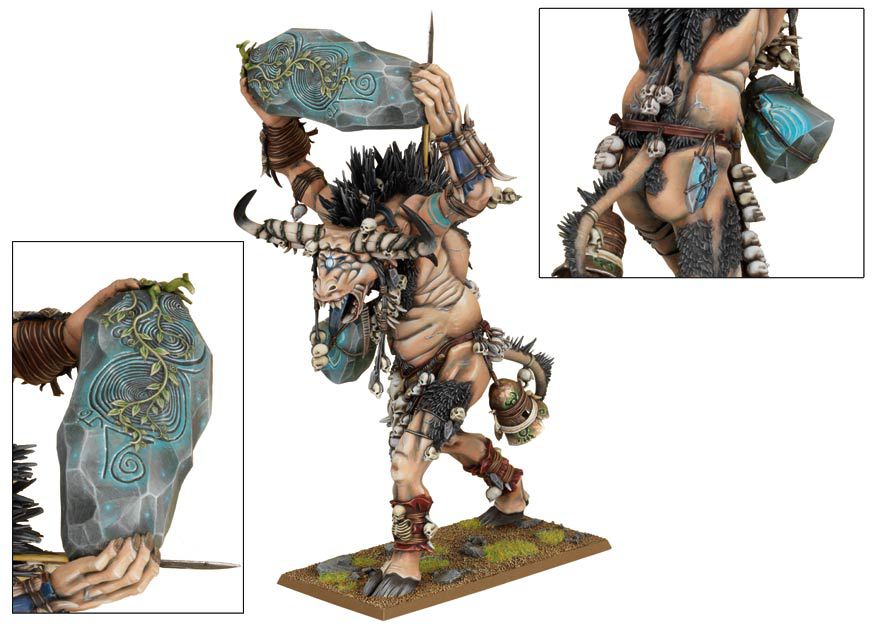 Cygors are distant cousins of the Minotaurs, but they have diverged significantly from their kin. Where once they could see the mortal world with two eyes, they can now only see the swirling Winds of Chaos with one. Assailed by such visions since birth, Cygors are all quite mad. While this lack of vision may seem utterly limiting, the Chaos Gods saw fit to gift the Cygor with a rather more useful ability – Ghostsight. While most creatures can easily escape the lumbering Cygor, those with magical powers shine like a beacon in the Cygor’s mind, making them very easy (and very tasty) prey. Few things can stop a Cygor once it’s chosen its target. 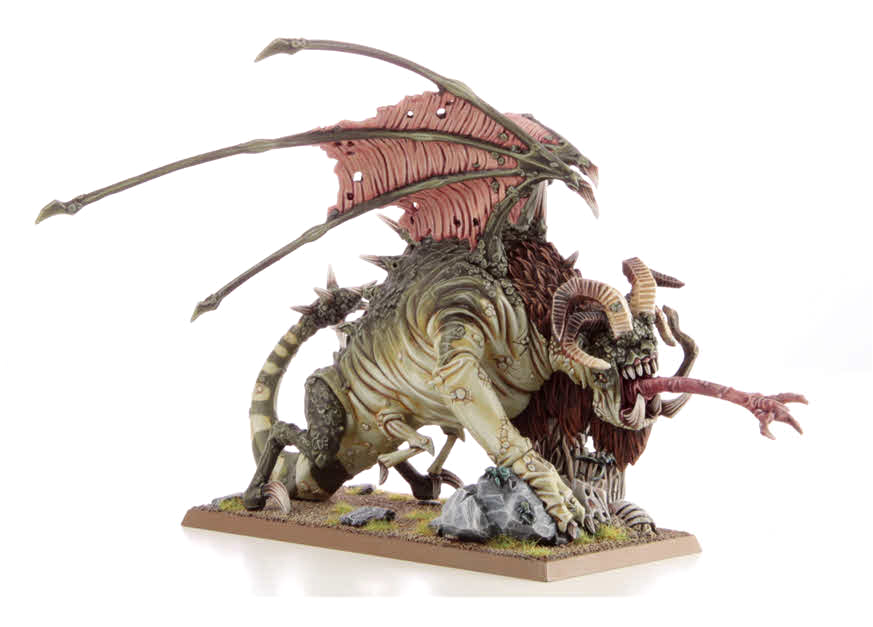 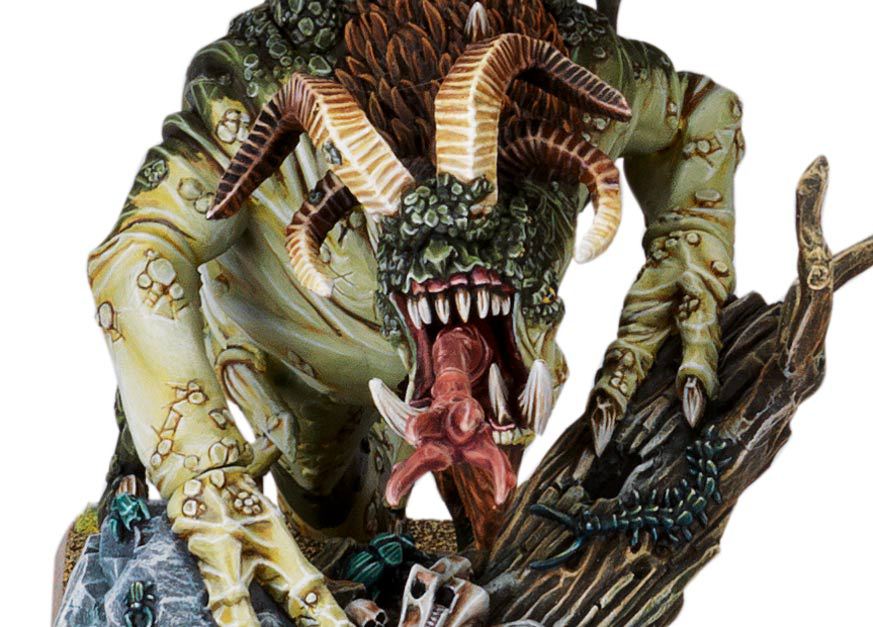 Jabberslythes are amongst the most ancient and foul of all the creatures of the deep forest. They are truly repugnant to look upon, having such grotesque and twisted features that even the clearest pools of water will not offer up their reflection. A sickening fusion of toad, sludge-drake, and many-limbed insect, the Jabberslythe encompasses all that is unwholesome and vile about nature and magnifies it a hundredfold. There is something so unearthly about these beasts that even to set eyes upon one is to go immediately and permanently insane. Bray-Shamans, to preserve the sanity of their herd, will quickly encourage the Jabberslythe to fly towards the enemy, where its horrific appearance will cause the most disruption. If its enemies don’t die of shock, fright or madness, they’ll almost certainly be torn apart by the Jabberslythe’s slavering jaws. 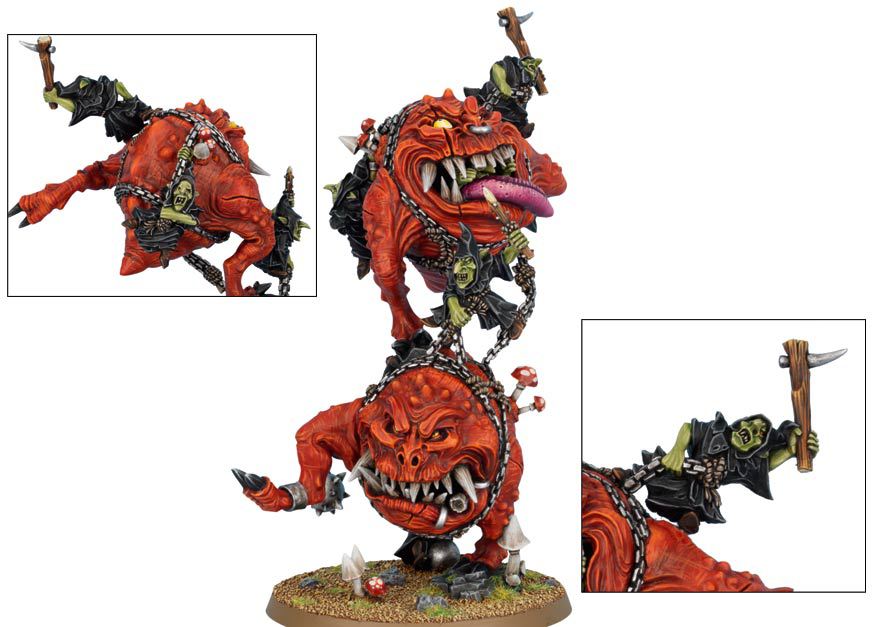 Night Goblins are barely sane at the best of times, so their invention of the Mangler Squig is hardly surprising. Essentially it is little more than two Great Cave Squigs chained together, which are poked repeatedly until they’re utterly furious and then hurled at the enemy. Several Night Goblins will attempt to steer the Mangler Squigs towards the enemy, though their efforts are largely unsuccessful. However, when this whirling nightmare of destruction does make contact with the enemy, the carnage it will cause is nothing short of spectacular. Limbs, body parts and bits of weapon are thrown high into the air, much to the delight of nearby Night Goblin onlookers.

Blood in the Badlands 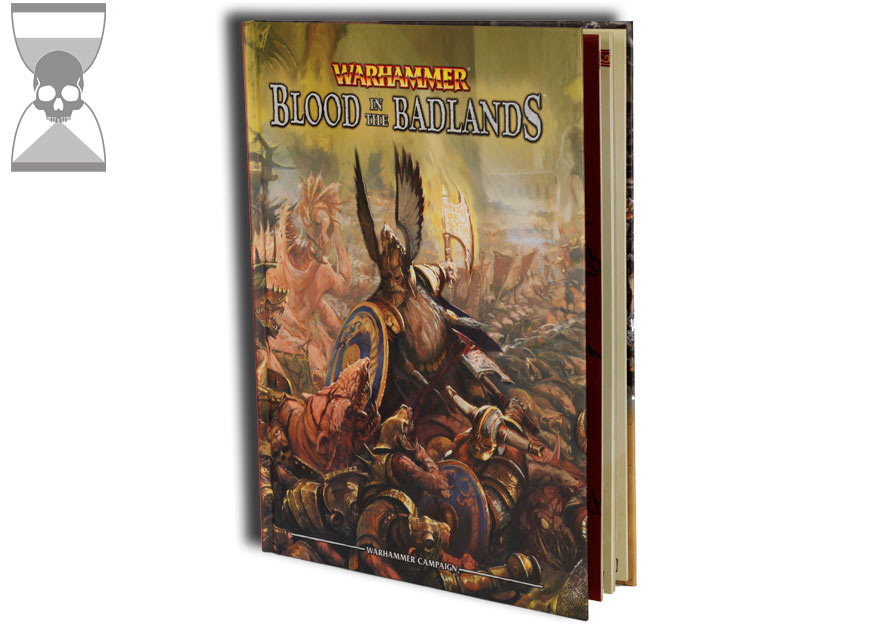 Blood in the Badlands is a campaign system for Warhammer that enables you to unleash your army against your foes and carve out a corner of the notorious Badlands for yourself. As well as the campaign system itself, the book contains rules that can be used in any Warhammer game, form massive multi-player scenarios featuring new magic items and spells, rules for underground battles and a complete siege expansion. Blood in the Badlands also features the tale of eight intrepid hobbyists as they play the campaign, including detailed battle reports, glorious army showcases and turn-by-turn accounts of their expanding empires. 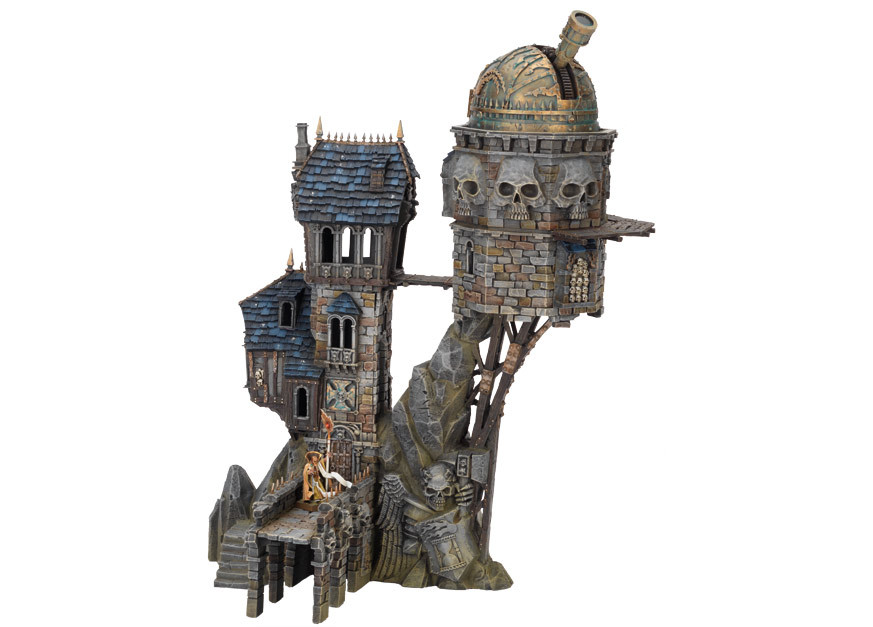 Across the Warhammer world there are many weird and wonderful structures, and Skullvane Manse is certainly one of them. Soaring high into the sky, this astrological observatory makes for a superb centrepiece on a Warhammer battlefield, an excellent objective in a game, and a fantastic painting project. This impressive plastic kit includes a large rocky base, upon which you’ll find two ramshackle buildings, a ruined viaduct and, of course, the observatory itself, which towers a mighty 14.5 inches above the ground. However, if you’re not into magic (specifically stargazing), then you can always assemble the kit with crenellated battlements instead of the observatory dome. 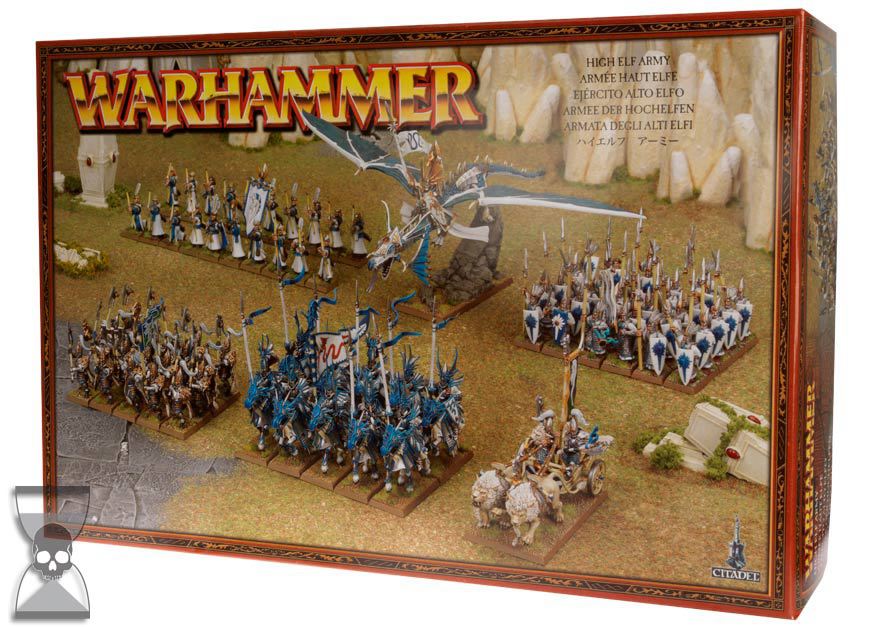 The High Elves were once the greatest race in the Warhammer world, but thousands of years of warfare has taken its toll on this once glorious race. To this end, all High Elves are taught the arts of war and their warriors are masters of sword, spear and bow. Their strength of arms is matched only by their innate understanding of magic and the powerful mages that wield it. Aided by powerful allies such as the ancient Dragons and noble Great Eagles, High Elf armies stand as beacons of light against the encroaching darkness of Chaos.

The High Elf Army is supplied as ten individual boxes in one bundle deal.

The High Elf Army is the best way to start a new High Elf collection or expand upon an existing one. This huge boxed set contains 84 plastic miniatures, including: 20 High Elf Archers, 32 High Elf Spearmen, 20 White Lions of Chrace, 10 Dragon Princes of Caledor, a High Elf Chariot and a High Elf Lord on Dragon. 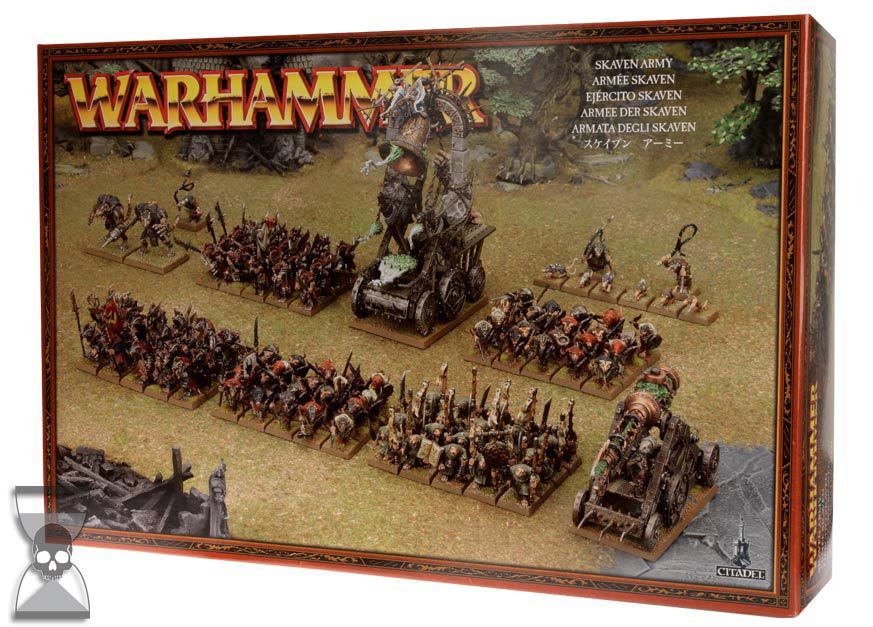 The Skaven are a race of malevolent ratmen that seek to rise from their subterranean lairs to rule the world. Accompanying the seething mass of a Skaven horde are all manner of diabolical engines of destruction and towering beasts of war. The Skaven seek total domination of the world in the name of the Great Horned Rat and will stop at nothing to further their nefarious plots.

The Skaven Army is supplied as eight individual boxes in one bundle deal.

The Skaven Army is the best way to start a new Skaven collection or expand upon an existing one. This huge boxed set contains 113 plastic miniatures, including 40 Stormvermin, 40 Clanrats, 20 Plague Monks, 2 Rat Ogres with Packmaster, 6 Giant rats with Packmasters, a Warp Lightning Cannon and a Screaming Bell. 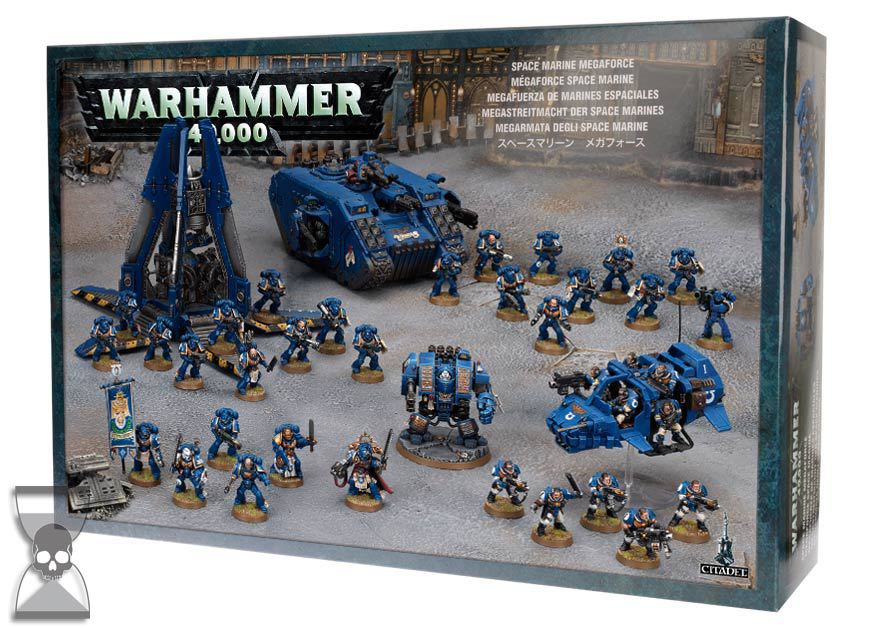 The Space Marines of the Adeptus Astartes are humanity’s ultimate warriors, dedicated to the defence of the Emperor and the Imperium of Man. They have fought the most thankless of wars against the most terrible foes, winning impossible victories when all around them have fallen. Armed with the most powerful weapons in Mankind’s armoury, and clad in thick power armour, these genetically engineered superhuman warriors are known as the Angels of Death, and they know no fear. 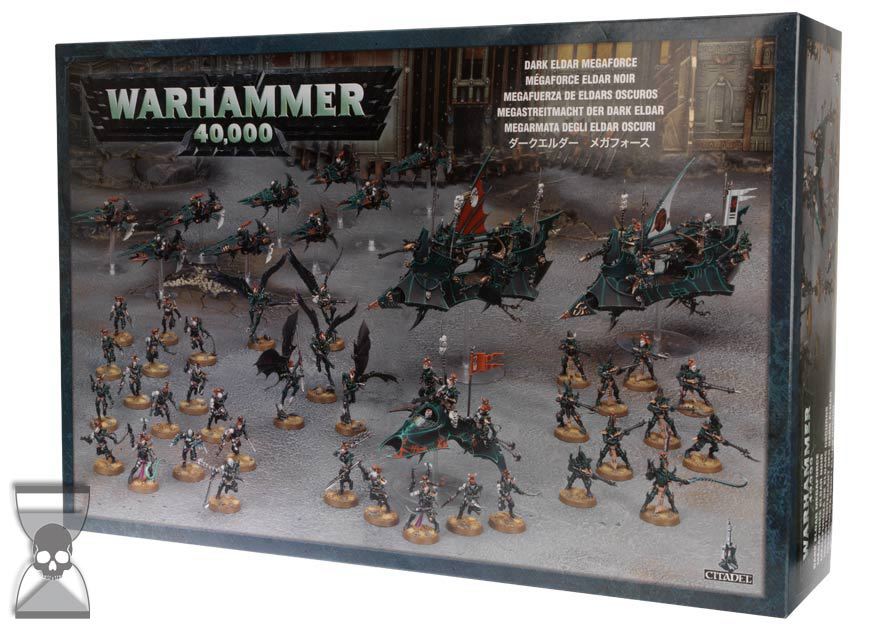 The Dark Eldar are pure evil in its most sickening and elemental sense. Sadists and murders all, they infest the hidden city of Commorragh, a hellish realm far from the eyes of mortal men. Their lightning-fast terror attacks upon realspace are legendary, for the act of war gives them literal sustenance, prolonging their lives and filling their slender frames with stolen energies until they can move like quicksilver and shrug off bullet wounds with hollow laughter.