Sheriff of Nottingham Board Game Review

Put on you poker face and get ready to bluff your way to the being the richest merchant in Nottingham. Sheriff of Nottingham is one of the better bluffing games available on the market. So get ready to load your cart, declare your goods and bribe or lie your way into Nottingham!

An exciting game of bluffing, bribery and smuggling!

Set during the Robin Hood period, the core of the game revolves around merchants bartering their way into Nottingham to sell their goods. Of course not all goods are deemed legal by the appointed Sheriff as he likes to keep the more exotic goods for himself and wouldn’t want the townspeople to get access to weapons, less they overthrow him and his tyrannical laws. The players have to get their goods into town to score points, while also evading the watchful eyes and harassment of the Sheriff.

Setup sees every player get a merchant stand and a matching colored merchant bag. These are placed in front of a player. Every player also receives 50 coins in different denominations. Next prepare the deck of cards – there’s normal goods, rare goods and contraband to shuffle in with the amount of cards being determined by the number of players. Just have  a look at the guide to see how many of each card should be included. These cards then become the “Goods: deck. Every player is dealt six cards from the `Goods’ draw deck and then the top five cards are revealed and discarded face up next to the Goods deck to form the first discard pile. Another lot of five cards is drawn from the draw deck and placed face up to the right of the deck to create a second discard pile. Then one player will have to play the Sheriff first and he or she will take the Sheriff marker to begin the game. The game ends when every player has been the sheriff twice.

The game is divided into  5 phases –

Here you’ll be bale to set aside any number of cards in your hand and draw that many new ones from the discard or draw deck(Goods deck) to stock your hand.

Now you can put up to 5 cards into your merchant bag. This is the items that you’re going to try and get into Nottingham.

Each player will declare the goods that they are taking into Nottingham. There are a few rules though – you must truthfully delcare the number of goods you’re taking in. You may only declare one type of legal good.

After declarations the Sheriff gets to question and ultimately decide which of the merchant bags we would like to check. At this stage bribery and bluffing is very much encouraged. Do whatever you can to avoid the eyes of the Sheriff, unless of course you were truthful in your declaration. When the Sheriff opens a bag if will either be that the merchant declared the truthfully or lied. If the player was honest then the sheriff needs to pay that player the red value on the card for the inconvenience of stopping them and they take all the goods and place it on their market stall. If however the lied then they must pay the sheriff penalties for any good other than the declared good. Even if you had two types of legal goods, only the declared good is safe. All other goods are discarded but you do get to take any of the declared good into your market stall.

The merchant players have to try and smuggle the goods into the market for a profit. The Legal Goods cards are of green color and represent cheese, bread, apples and chickens and they do not raise any suspicion. The Contraband cards are in red and they represent everything illegal as per the Sheriff. The value of the goods is listed on all the cards and a penalty amount is also listed, representing the fine in gold coins that a player has to pay when penalized.

Here you can restock your hand with up to 6 cards. Move the Sheriff to the next player and then the new round starts. If it was the final round then the game ends (every player had a chance to be the sheriff twice). Now you’ll need to score points. Count up the values and amount of each good you have. The players with the most and second most of each good will also net the King and Queen bonus for that good. Count up contraband and get your final totals. The player with the most points win!

What’s in the box? (First Edition) 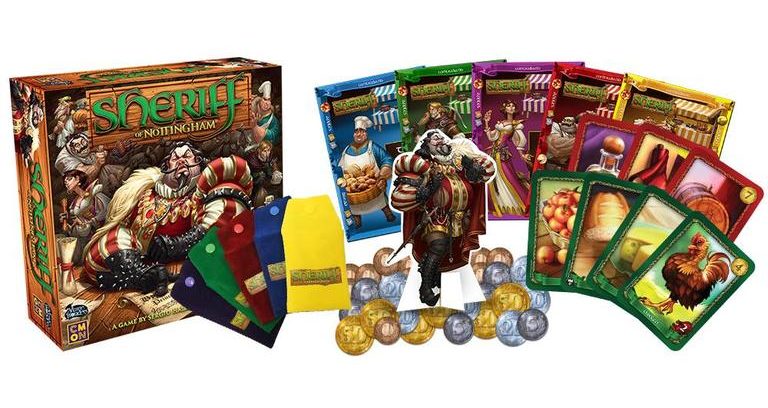 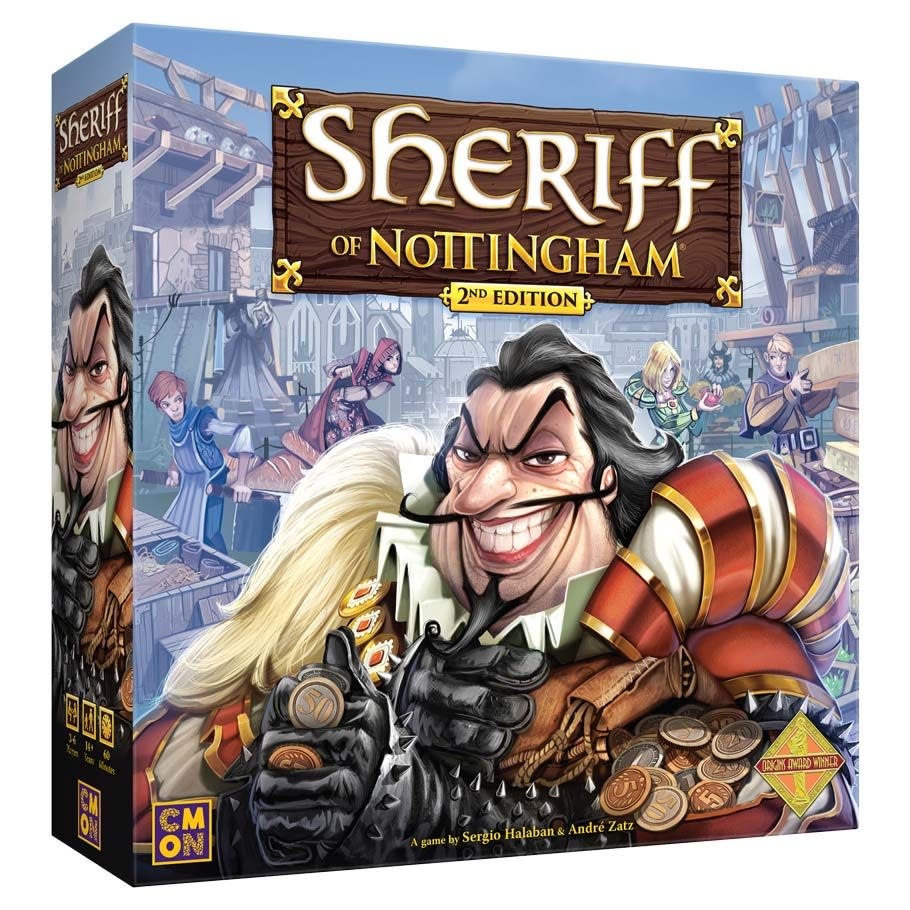 This new version of Sheriff of Nottingham retains all the bluffing and bribing action of the original, but has been cleaned up for easier play.

CMON published a 2nd edition of this great game, but have made some changes. Let’s take a look at the differences over the editions.

Very little has changed here, from we can see only the market phase being affected. Players don’t have the two discard piles to draw from and only get to draw from the draw pile. It’s a fairly big change for me – it does speed up the game. But we really enjoy the slightly more drafting feel of having access to the two discard piles in the original game. It opens up more bluffing opportunities by leaving tid bits of information for the other players to use.

The set has been upgraded to include the previous expansions so offers decent value. It includes the 6th player version, where two players will will take on the role of the Sheriff’s Deputies and work together on the inspection phase each turn. It also includes the Black Market expansion, where players can try to get high value illicit goods into Nottingham. Getting caught does mean bigger penalties.

The second edition has seen the artwork being totally reworked. And unfortunately I’m not a fan of the new style. I prefer pretty much everything in the original over the new style. The new style looks a bit bland, albeit they believe it makes things clearer on the cards and dashboards.  The old had a lot more theme and better looking components in my opinion. 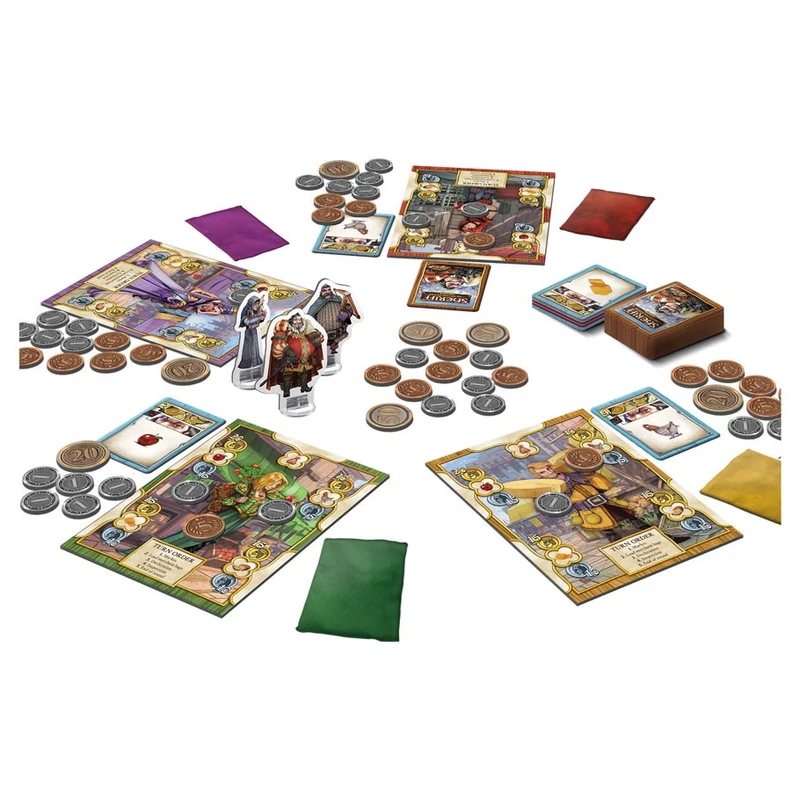 Should you buy it?

If you own the original version then I don’t believe you need to get the Second Edition as if pretty much offers the same experience. But if you don’t have the original then I’d definitely recommend picking up either the original(if you can still find it) or the second edition as at it’s core it’s still a great game. There’s a ton of fun to be had in Sheriff of Nottingham.