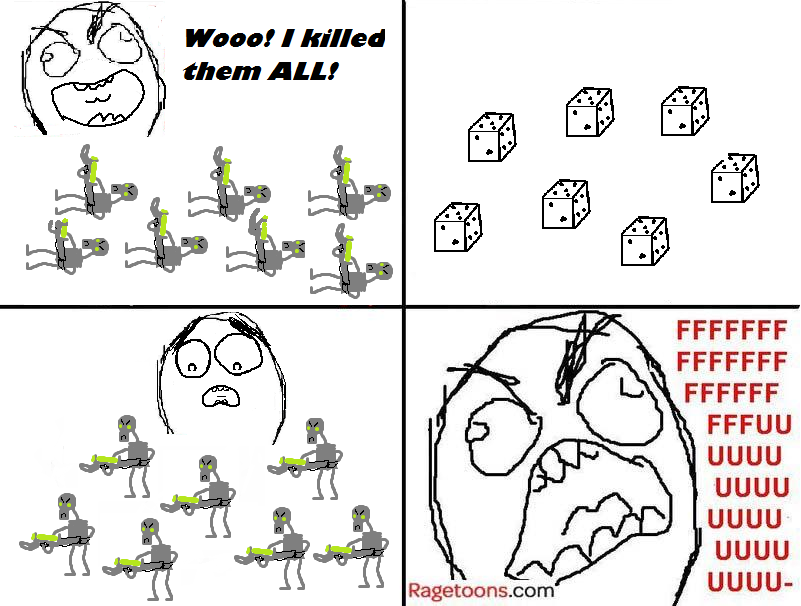 It has finally arrived, about 10 years late but at least its here. The Necron codex was released over the weekend, which is pretty good news for the toasters who were pretty tired of their outdated rules and limited fluff. As you can guess the newcrons (the good jokes don’t last forever) will be the subject of this issue.

Everyone was talking about the new fluff, or rather arguing over whether it was better than the old fluff or sacrilegious to the old fluff. The basics are that in the old codex the necrons were pretty much slaves to the C’tan (powerful race of god-like beings born from the power of a star) who go about eating souls and stuff. The necrons themselves were totally silent and subserviant to the C’tan. After some intense soul devouring the galaxy was pretty barren so they slept for a few million years. That was pretty much it, it is mentioned that the necrons were once the nectroyr and they opted for immortality and got their hard cases but still not very much to go on. So as you can see the fluff meant that the necrons were… boring, they just hated everyone because they were told to and that was that.

For the new fluff to make sense you have to kind of pretend that the old fluff never happened. The new fluff goes like this:

The purpose of that long and rather boring history of toaster was just to point out how things have changed. The result of this new fluff is that the necrons are like any other race now, they get angry, they hate the eldar, and from time to time they actually act with honour.

The new fluff when considering the finer aspects of the codex is just brilliant much of it is over the top and completely ridiculous but it makes it interesting and quite amusing at points. My favorite:

Love it hate it, the choice is yours. I think its brliant to have some new dynamic fluff and it doesnt stray to far away form the old stuff since the bulk of the race is still just a bunch of automatons.

Those are really the noteworthy things I can think of right now. I think the codex will play completely directly to anything the meta game is used and for that reason I think its a great change. Im pretty sure anyone who goes to tournaments often enough is tired of IG leafblower lists, dual lash, or draigowing (people who play draigowing are cheesy, although very clever). Their awesome shooting troops (warriors and immortals) will have a huge impact I think, warriors are 13pts and have bolters that glance vehicles on 6s, 4+ save, with the chance to just get back up again after being killed. A horde of cheap, resilient, shooty troops like the warriors could be quite a pain. Unfortunately I don’t think its going to dominate competitively speaking don’t get me wrong I think it will be scary to face on the table but nothing compared to IG, grey knights, wolves or BA

Well thats all I have to say about that. I suggest you all go out and buy the codex, its really a great read. I dont know how I can write 1600 words in 40min on this but when I have to do 3 lines on some contractual law I fall apart. Next time I think I will do something on tournaments

P.S. Always good to hear you comments, please leave me something. If you know someone who will be interested in reading my poor language get them onto our blog!

‘Dear lady, let me express my fulsome appreciation for
your most generous gift. It is so very rare to discover
another of my own kind that appreciates my work,
therefore to find understanding amongst a member of
another race is nothing short of revelation.

I realise that you briefly trod my galleries, but the fact
that you spotted in so short a time that my Acabrius
War collection was lacking three regiments of Catachan
warriors reveals that you truly have a collector’s eye
for detail. And to send five regiments! Such generosity
will allow me to weed out and replace a few of the more
substandard pieces in my collection.

If I might level a minor criticism, the instructions
issued to your gift were manifestly not as clear as you
thought, as most of them had to be forcibly restrained
– sadly it seems that the lower orders will always
behave like an army of invasion, whether that be their
purpose or not. However, this is a minor complaint
and seems almost churlish under the circumstances, so
please allow me to repay your gift with one of my own.
Accompanying this message is a Hyperstone Maze,
one of a series of tesseract labyrinths constructed at the
height of the Charnovokh Dynasty. It is a trinket really,
of interest only to scholars such as you and I, but I trust
you will find it amusing – assuming you have the wit to
escape its clutches, of course.’
– hyperscroll message from Trazyn the Infinite
to Inquisitor Valeria, c887.805.M41

8 thoughts on “The New Necron Codex”