Warhammer Vermintide Is Coming Along Nicely

So for those who don’t know Warhammer: End Times – Vermintide is a co-operative action first person shooter and melee combat adventure set in the Warhammer universe. It should be available late 2015 on PC, PlayStation 4 and Xbox One. In Vermintide 4 players play together against a relentless Skaven invasion of the city of Ubersreik.

Check out the new Inside The Vermintide video below:

There will be a number of classes available to players each with their own set of abilities, strength and weaknesses – this leaves it up to the party to come together and survive against the Skaven horde. You can check them out on our Vermintide heroes page. It kinda looks like Left for Dead just in the Warhammer setting, which I think could be great. Lets hope Fatshark Games get this one right! Check out the Announcement Teaser, a quick game play trailer and a Q&A with the game designer below. 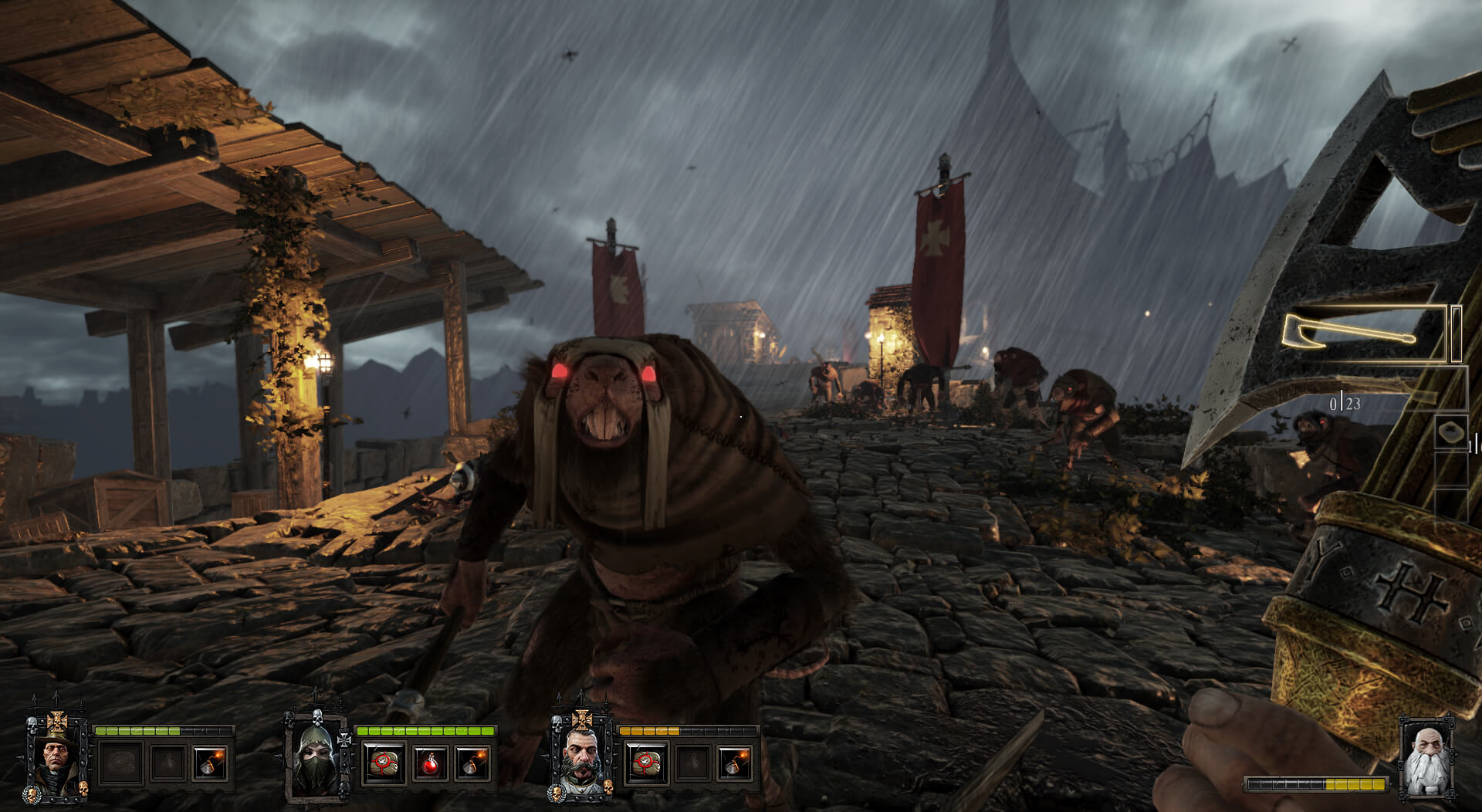 The Q&A sessions finally shed some light on what exactly we can expect from Vermintide – get all the info below:

Q: How would you describe the gameplay style?
A: Vermintide is an action-focused co-op game, where you and your team shoot, swing and bash your way through the Skaven legions who have overrun the city. With Vermintide we are taking first person melee combat to the next level. We have put a great deal of effort into creating a truly visceral and impactful melee combat system along with a variety of different ranged alternatives.

We wanted the combat to be up close and personal and have created multiple systems to support this. Since we feel that the most important aspect of melee combat is feedback, players will be able to decapitate their enemies in a variety of ways and blood will splatter on any surface it touches to make sure that the player really feels their attacks connecting with the target. This also heavily ties into the gritty aspect of the Warhammer universe which is something that we wanted to portray in the game. And come on, its the End Times, the world is going under as we know it! The gloves have come off quite some time ago.

In addition to melee combat we have a wide selection of ranged weapons that players can utilise to become effective at all distances. Each character has access to a wide range of firearms, stretching from bows and crossbows to pistols and repeating handguns.

We want players to always feel like they are fighting against overwhelming odds to create a game where cooperation is the central focus. Players will need to constantly be aware of their surroundings and make sure to stick together and watch other players backs in order to to survive in Vermintide.

Q: Why are you making this game?
A: Cooperative games have always been a favorite of mine, there simply is nothing that can beat the experience of playing with friends and together overcoming overwhelming odds. Combining that style of gameplay with the incredible richness of the Warhammer brand is truly a dream come true for me personally and for us as a company. We jokingly say that Warhammer is in our DNA but quite frankly the truth.

Taking our expertise in melee combat from previous games and elevating it to the next level in a first person co-op experience has been hugely rewarding and exciting. Seeing this world take shape in a first person perspective, letting players experience the Warhammer fantasy world up close and personal is something that makes going to work each day a true joy.

Q: How has it been working with a licensed product?
A: We have had a very close relationship with Games Workshop throughout the development of the game. They approve every asset that go into the game to make sure that we stay true to the Warhammer brand. Its been great to have them there to support us in making sure we deliver something that the fans will react well to.

When the players arrive in the town of Ubersreik the city has just been overrun by the Skaven army. So it is up to them to join the resistance and fight back. Its really a story about how these five characters band together against impossible odds to become heroes.

Q: Do you have a favorite character?
A: It is hard to pick one since they all have their own unique weapons and personalities that make them special. But if I hade pick one it would have to be Bardin Goreksson our Dwarf Ranger. One thing that I love about him is that his perspective is lower than the other characters which puts the player at equal height with the Skaven. There is nothing quite like being able to look a clan rat straight in the eye as you bury a great axe in their skull. I also love going to town with his Grudge-raker (which is a double barreled shotgun) on an unsuspecting group of rabid Skaven slaves. I recently listened in on the voice recording session and quite frankly it’s going to be hard not to fall in love with this stout fellow.

Q: Will I be able to play solo?
A: Yes, if you prefer to play alone we have bots that will take the place of the human players. This will allow you to experience the game on your own, while simultaneously removing any issues with players dropping out of the game mid session, since their place will simply be filled by a bot until another player comes in and takes over.

Q: Will you be able to play as the Skaven?
A: At this point in time we decided to focus on having the Skaven as our enemy so we could put more effort and detail into the 5 characters we have. Trying to create playable Skaven as well would simply have forced us to limit the effort we could put into creating a better experience for the players.

Q: What engine are you using?
A: The Stingray™ game engine, which is an Autodesk Gameware product.

Q: When will Warhammer: End Times – Vermintide be released?
A: We aim to release Vermintide during the Fall of 2015

Q: Will there be any microtransactions in the game?
A: No.

Q: Will the game be released through Early Access?
A: No.

Q: Will there be a beta?
A: Yes! To sign up, check out http://vermintide.com/newsletter/