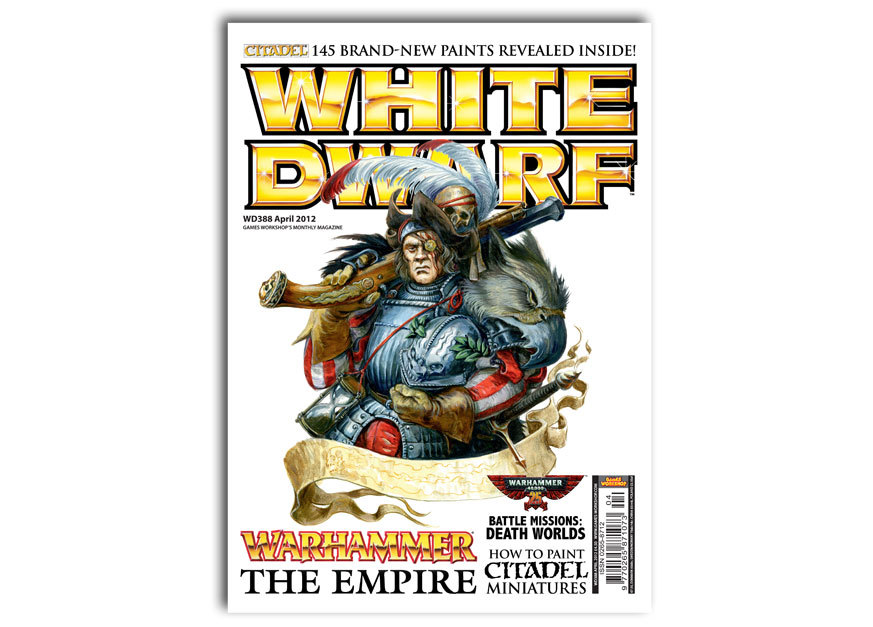 Inside this month’s issue:

The All-New Citadel Paint Range:We introduce the most comprehensive and expansive Citadel Paint range Games Workshop has ever produced.

Citadel Miniatures: Painting Guide: Part One: In the first part of this painting guide, the Hobby Team present 24 stage-by-stage guides to using the new paints in order to achieve different effects.

Sigmar’s Heirs: The Empire is the greatest nation in the Old World, its army a bulwark against the forces of Destruction. We look at the various forces that make up the army of the Empire.

The Reign of Karl Franz: The Emperor Karl Franz is a statesman, but he is also a famed general. In this article we showcase one of his most famous battles, and present an extract from Warhammer: The Empire.

Battle Missions: Death Worlds: In this exclusive new set of Battle Missions, games developer Phil Kelly presents rules and scenarios for fighting in the most inhospitable of battlezones.

Battle Report: The Wolf and the Kraken: The White Dwarf team try out the new Death Worlds Battle Missions, pitting the Space Wolves against the Tyranids.

Army Project: Space Wolves: Following on from his Thunderwolf Cavalry last month, Steve Bowerman shows you how to paint an army of Space Wolves from start to finish using the new Citadel Paints.

You’ll also find full details of all the latest releases and news, plus a directory featuring all of the hobby activities in your local area.